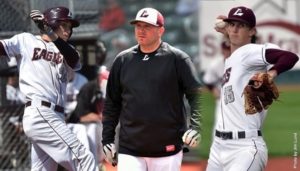 Boushley is the third Eagle to claim the pitching award, joining Joe Ohm (1997) and Andy Elskamp (2000).  he leads the conference with a 1.83 ERA, eight wins, 73.2 innings pitched and four complete games.  Boushley has recorded at least seven strikeouts in seven of his 10 starting assignments.  He allowed two earned runs or fewer in his first eight appearances.

Schwarz received the coaching honor for the third time in his career (2006, 2012) after leading the Eagles to the 14th WIAC regular-season championship and third tournament title in program history.

The Eagles take a 34-8 record into the NCAA Regionals today.