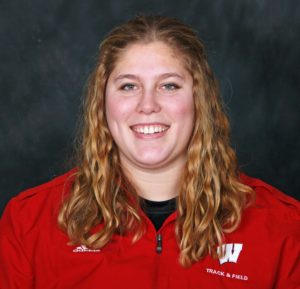 Wisconsin track & field standout Kelsey Card finished third in the discus at the 2016 U.S. Olympic Team trials to earn a spot on Team USA for the 2016 Summer Olympic games in Rio next month.

Card’s best throw came on her first attempt of the day, as she  threw the discus 197 feet, 3 inches to grab one of the three spots on the U.S. team that’s heading to Rio de Jainero in August.

Card became the seventh athlete in Wisconsin program history to earn a spot in the Olympics.  She also becomes the first UW athlete to compete in a field event at the Olympics.

Ziemek broke his own Badgers and Big Ten record after tallying 8,413 points.  Ziemek is the 17th athlete in UW men’s track and field history to compete at the Summer Olympics.