You are here: Home / News / Dangerous heat across Wisconsin 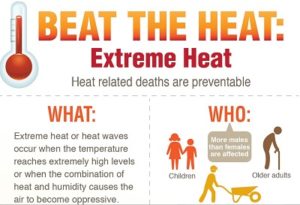 Severe heat has descended across much of Wisconsin, and that can be dangerous for vulnerable residents. Heat is the number one weather-related killer in the United States and Wisconsin far exceeding tornadoes, severe storms and floods combined.

The heat index is a combination of high the temperatures and high humidity. “That’s really what your body is dealing with,” said Tod Pritchard with Wisconsin Emergency Management. “It’s not just the air temperature, it’s the humidity in the air that makes it oppressive.”

“Many of those victims were people who were socially isolated, they tended to kind keep to themselves, they didn’t talk to other people on a daily basis, they had previous medical conditions and some had mental health conditions as well,” Pritchard said. “This is a perfect time to reach out to friends, family and neighbors, and making sure that they’re okay.”

With much of the state under an Excessive Heat Warning, Watch or Advisory on Thursday and Friday, cooling centers will be open in communities across the state. “Make sure you’re getting into air conditioning when you can, even if it’s just for a little bit of time,” said Pritchard. “An hour or two in air conditioning can really help.”