You are here: Home / Fires/Accidents/Disasters / Governor seeks loans to help with flood damage in Buffalo County 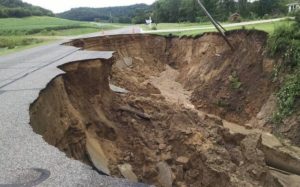 Federal loans might be on the way to help people in Buffalo County recover from damage done by flooding in August. Governor Scott Walker has asked the U.S. Small Business Administration to inspect the damage and meet with state and local officials, as a first step toward considering disaster aid.

Up to eight inches of rain caused flash floods and mudslides August 11 — and lesser rains eight days later caused some of the same homes to flood again. The governor’s office says 16 homes had major damage, and more than 200 other houses had minor flood damage. It’s not enough to consider full disaster relief from the Federal Emergency Management Agency, but low-interest SBA loans are possible.