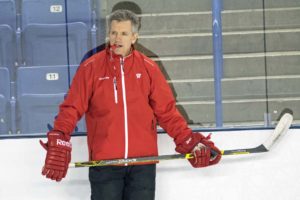 The Badgers blanked the Huskies 9-0 in the series opener the night before at LaBahn Arena.

The program offered fans $1 tickets and the opportunity to donate non-perishable food items to a local charity and 15,359 of them came out to watch the best women’s team in the country do their thing.

The new record broke the one that the Badgers and Minnesota Gophers set in 2014 at the Kohl Center when 13,573 fans were on hand.

The crowd was the eighth largest to see a women’s hockey game anywhere in the world.  The top seven were all in Canada and most of them were at the 2010 Winter Olympic games in Vancouver.

Emily Clark scored the game-winning goal on the power play in the second period.

AUDIO: Emily Clark said it was a great event to be a part of :07

AUDIO: Mark Johnson says it was a great day for hockey :18

The Badgers improved their record to 20-2-1 overall and 15-2-1 in the WCHA.  They clinched home ice for the first round of the WCHA playoffs, which are still six weeks away.