You are here: Home / News / Snow blankets much of western Wisconsin 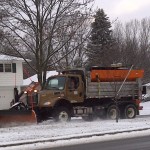 Western Wisconsin was expected to get the brunt of the latest snowstorm. The National Weather Service said Pepin County could get up to 11 inches, the La Crosse area can expect a total 6-9 inches, and winter storm warnings are posted for both those regions until 6:00 p.m. Wednesday.

Two to 8 inches of generally wet and heavy snow are in the forecast for the remainder of the southern two thirds of Wisconsin.

Some areas of the southeast will receive a mix of rain and snow before changing to all snow in the afternoon. Meanwhile, a flood warning is in effect on the Fox River near Berlin in Green Lake County for Thursday until further notice — and minor flooding is expected.

About 50 school districts cancelled classes and activities Wednesday — and many other schools were starting two hours late. Madison joined about 40 other districts in southern and southwest, after school officials there got some heat last week for staying open during an ice storm.