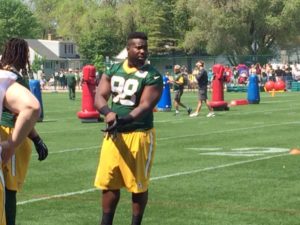 The NFL announced on Tuesday that Green Bay Packers defensive tackle Letroy Guion will miss the first four games of the upcoming 2017 season for violating the league’s policy on performance-enhancing drugs.

It’s the second time Guion has been suspended for violating the substance-abuse policy.  He sat out the first three games of 2015 after being arrested for possession of marijuana in his hometown of Starke, Florida.

Guion just finished the first year of a three-year contract that would pay him a total of $11.25 million.  According to ESPN.com’s Rob Demovsky, a source said Guion and the team have agreed to restructure the remaining two years of the deal.  Guion was scheduled to earn roster bonuses of $400,000 later this week and on May 2, but it’s likely those have been delayed until after the suspension.

Guion is still allowed to participate in all offseason activities and play in the preseason.

The suspension opens the door for a larger role for last years top draft pick Kenny Clark.  Clark had a good rookie season and finished strong.  He may have been ready to unseat Guion for the starters job anyway.

Some believe Guion could be released, but there’s a good chance the restructured contract means the Packers will keep him around.