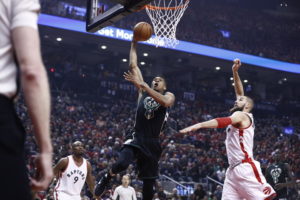 The Milwaukee Bucks defense has been hit and miss this season.  When they decide to defend, the result is usually very good.  Such was the case in their Eastern Conference playoff opener in Toronto on Saturday.

The Bucks pulled away in the second half for a 97-83 win to take game one of the best-of-seven series against the Raptors.

Giannis Antetokounmpo had a strong start and finished with 28 points.  Teammate Greg Monroe, who played in his first ever playoff game put together one of his finest performances of the season, scoring 14 points and pulling down 15 rebounds.

Khris Middleton struggled early, making just 1 of his first 10 field goals, but he made some clutch baskets late to help the Bucks pull away.  Middleton finished with 10 points and nine assists.

Malcolm Brogdon and Thon Maker hardly looked like rookies playing their first playoff games.  Brogdon had 16 points and six rebounds, while Maker made his presence felt with a key block in the third quarter.

DeMar DeRozan led the Raptors with 27 points, but made just 7 of 21 field goals.  Forward Serge Ibaka had 19 points and 14 rebounds.

Game two of the series is in Toronto on Tuesday night before the team’s head to Milwaukee for games three and four on Thursday and Saturday.