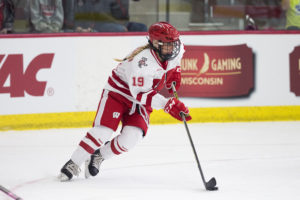 Junior forward Sophia Shaver scored the game-winning goal with 13 minutes left in the third period to lead the top-ranked Wisconsin women’s hockey team to a 3-2 win over Minnesota State in Mankato, Minn., on Friday night.

The Badgers scored twice in the third.  Presley Norby scored her third goal of the season to tie the game at two,  Shaver scored two minutes later to give the Badgers the lead and subsequent win.

The two teams wrap up their series at 3 p.m. Saturday at the Verizon Wireless Center.