Democrat Barack Obama is a better candidate, and more capable of being President, thanks to his bitter primary battle with Hillary Clinton. That's the view of Tim Sullivan of Verona, a Wisconsin delegate to next week's Democratic convention in Denver.

Sullivan says Clinton helped to force the nomination and helped apply “some beatings” that left the last candidate standing better off for the general election.

Sullivan was an early Clinton supporter and campaigned for her around the country. But now, he's confident that Obama can win in November.

Iraq veterans opposed to the conflict and occupation there want convention attention on their issues. Todd Dennis with the Madison Chapter of Iraq Veterans Against the War says the national veterans organization will be at both national conventions, starting with the DNC in Denver, where they hope to gain the attention of Barack Obama. “We're going to try to present Senator Obama or his staff a list of demands for better health care for returning veterans,” says Dennis. “Obviously, we'd like to hear the that Democratic national party will go along with our demand for immediate withdrawal of all occupying forces.”

Dennis concedes that the economy may now be a larger concern for many voters than the Iraq war, but believes part of the strain on the economy can be linked to the millions being spent on the occupation.

Media reports indicate Obama's campaign has gotten more money from active duty service members than that of John McCain. “I think it's clear that the active duty troops are fed up with the occupation,” says Dennis. “They want to end the occupation, and they're funding Senator Obama's campaign to do so.” And while Republican McCain portrays himself as the true friend of veterans, Dennis says not every veterans' group agrees with that assessment. 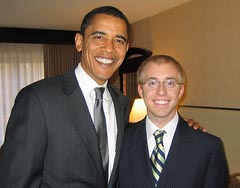 He's the youngest person ever elected to the Democratic National Committee, he's listed in Wikipedia, and he's been interviewed by the BBC .

DNC member Jason Rae is a 21 year old from Rice Lake, a student at Marquette University, and is attending his second national convention as a delegate. This time, he is a “superdelegate” committed to Barack Obama, and is also the chair for the DNC Youth Council. Will younger voters actually turn out? Rae says the primaries were encouraging. “We saw the number of youth voters double, triple and even, in some states, quadruple,” says Rae. “All of the country we've seen young voters turning out . . . and participating.”

Rae says he'll be very busy with the DNC Youth Council during the convention in Denver, and while he'd like to see Barack Obama at one of those events, he thinks the Illinois Senator will be too busy with other convention business.

The wait continues for a decision on who will serve as Democrat Barack Obama's running mate.

Several names are being thrown around, but just who Obama will pick as his Vice President remains a mystery. Democratic Party of Wisconsin chairman Joe Wineke doesn't know who will earn the nod, but he's hopeful the candidate will be able to help unite the party in the coming months.

Wineke says he'd like to see a candidate with a strong background in foreign policy, an area Obama has been frequently criticized on for a lack of experience.
Obama is expected to formally announce his selection on Saturday, just two days before the Democratic National Convention begins in Denver. Wineke says the timing is perfect.

Republicans also remain in the dark on who John McCain plans to pick for his VP. Although, Wineke does find humor in the rumors that former Democrat Joe Lieberman could be on the GOP ticket. The Senator is already a planned speaker at the Republican National Convention early next month.