You are here: Home / Archives for College of St. Scholastica hockey 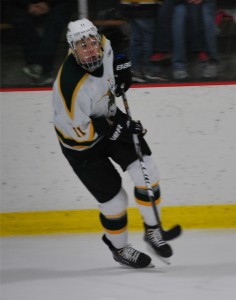 The Green Knights beat the Lawrence University Vikings 6-3 in a physical game.  St. Norbert finished the first period with a lead of 4-1.  Tyler Zepeda opened the scoring at the 1:18 mark with teammate Cody Keefer scoring only 16 seconds later at the 1:34 mark to make it 2-0.

Kyle Stroh scored the first of his three goals at the 9:52 mark, and Carl Ekstrom scored at the 14:21 mark.  Lawrence’s Steve Hughes put the Vikings on the scoreboard at the 11:10 mark.

The second period saw St. Norbert’s Kyle Stroh score his second at the 7:35 mark to make the game 5-1.

Lawrence scored two goals in the third period from Renato Engler, at the 15:04 mark, and Derek Brickan, at the 15:50 mark, to give the Vikings life and make the game 5-3.

St. Norbert put the nail in the coffin with Stroh’s third goal of the game at the 16:33 mark to make the game 6-3.

Green Knight Travis Bosch had 24 saves in the win, while Viking Anton Olsson had 31 saves.

The St. Scholastica Saints rallied from behind and scored two third period goals to take down the Marian University Sabres 2-1.

The first period saw a total of 16 shots on goal for both teams, and Matt Berger of Marian University finally broke through with a goal at the 10:17 mark in the second period.

The Saints tied the game up when Brandon Nowakowski scored in the third period at the 3:37 mark.  With a little under four minutes to go, Brandon scored his second goal of the game to win it for St. Scholastica.

St. Scholastica’s Colin Rundell had 32 saves in the win, while Marian’s Randy Willis had 35 saves.

St. Norbert College and St. Scholastica will look to continue their winning ways as they play each other in two weeks. 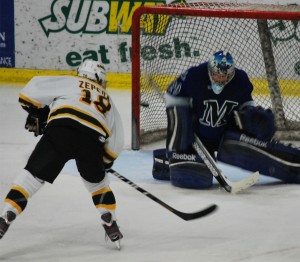 The College of St. Scholastica Saints (2-5-0) and 6th ranked St. Norbert College  Green Knights (7-2-1) both won their games on the opening day of the MCHA/NCHA Thanksgiving Tournament.

The St. Scholastica Saints snapped a five-game losing streak Friday night when they defeated the Lawrence University Vikings (2-5-0) by a score of 9-2.

The Saints opened the scoring early in the first period with a goal at the 1:19 mark by Paul Marcoux.  Keegan Bruce, at the 4:23 mark, and Chad Golanowski, at the 4:59 mark, also scored for to lift the Saints to a 3-0 lead at the end of the first period.

Two goals, at the 0:32 mark and 4:52 mark, by St. Scholastica’s Brandon Nowakowski made the game 5-0 in the second period.  After another St. Scholastica goal from Brett Corcoran at the 9:09 mark, Lawrence University got on the board with a goal from Renato Engler at the 17:19 mark to make it 6-1.

Third period goals from Bobby Lipsett, at the 4:28 mark, and Brenden Kotyk, at the 5:09 and 8:17 mark, added to the Saints lead to make it 9-1.  Rudi Pino scored at the 19:10 mark to give Lawrence University a consolation goal. END_OF_DOCUMENT_TOKEN_TO_BE_REPLACED