You are here: Home / Archives for High School Football 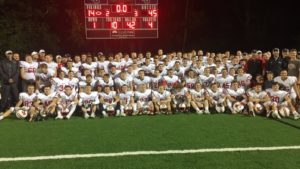 Whitefish Bay head football coach Jim Tietjen, lost his battle with brain cancer, passing away this week at the age of 61.

Tietjen went 79-64 with ten playoff appearances and a pair of conference titles at the school.

Tietjen graduated from Whitefish Bay in 1972 and coached there from 1985 to 1996 before becoming the school’s head coach.

His best season came in 2012 when the Blue Dukes fell in the Division 2 semifinals in overtime.

Tietjen was inducted into the Wisconsin Football Coaches Association Hall of Fame in 2014.

Sievert was an assistant at Kaukauna from 2000 to 2003, then joined Steve Jorgensen’s coaching staff at Kimberly as defensive coordinator in 2004.