You are here: Home / Archives for Tony Snell

Giannis Antetokounmpo scored 23 points and added eight rebounds and eight assists to lead the Milwaukee Bucks to their third straight win, 111-93 over the Brooklyn Nets.

Jabari Parker added 22 points, hitting nine-of-14 shots from the field.  Tony Snell and Malcolm Brogdon had 13 points each for the Bucks (9-8), who took over with a 38 point third quarter.

Brook Lopez had 15 points and Sean Kilpatrick added 14 for the Nets.

The two teams will meet again on Saturday in Milwaukee. 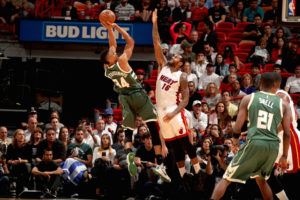 Giannis Antetokounmpo #34 of the Milwaukee Bucks shoots the ball against the Miami Heat at American Airlines Arena in Miami, Florida.(Photo by Issac Baldizon/NBAE via Getty Images)

The Milwaukee Bucks scored only 25 points in the second half and shot just 32.9% for the game, falling to the Miami Heat 96-73 on Thursday night.

Jabari Parker hit just 1 of 11 shots in the second half and five of 20 for the game.

The Milwaukee Bucks finalized their deal with Chicago, sending point-guard Michael Carter-Williams to the Bulls in exchange for backup shooting guard Tony Snell.

Carter-Williams appeared in 54 games (37 starts) for the Bucks last season and averaged 11.5 points, 5.2 assists and 5.1 rebounds in 30.5 minutes a game.  He was originally the 11th overall pick of the Philadelphia 76ers in the 2013 NBA Draft out of Syracuse.

The Bucks acquired Carter-Williams in a Feb. 19, 2015 trade with Philadelphia. 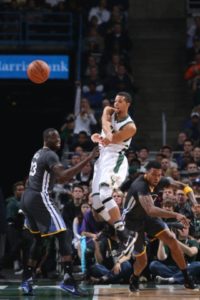 The Milwaukee Bucks dropped their second straight preseason game, 107-86 to the Chicago Bulls.

The Bucks jumped out to a 17-point halftime lead but were outscored in the fourth quarter 37-7.

The Bucks (2-2) have two preseason games left, Monday at Detroit and Wednesday night at home against Indiana.

After the game, the worked out a deal with the Bulls, sending guard Michael Carter-Williams for shooting guard Tony Snell.  The trade is expected to be finalized on Monday.

Snell averaged 5.3 points and 3.1 rebounds while averaging 20 minutes a game for the Bulls last season.

While Giannis Antetokounmpo will handle the ball for the Bucks on offense, it’ll be Matthew Dellavedova, rookie Malcolm Brogdon and Jason Terry that will cover opponent point guards on defense.