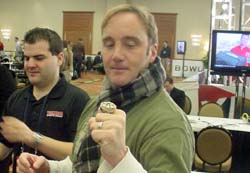 match-up against the Pittsburgh Steelers on Sunday.

Donald Driver only took part in the early portion of practice on Thursday after aggravating a thigh injury that’s bothered him during the regular season.  Driver had some soreness after practice on Wednesday and coach Mike McCarthy his veteran wide receiver will be fine.  McCarthy said Driver wanted to practice yesterday, but he was held out for precautionary reasons.

If the Packers would have to play without Driver, their ability to spread out the Steelers’ defense with five wide receivers would suffer a blow.  But Driver has waited 11 years for a Super Bowl ring and there’s almost no chance of him being held out on Sunday.

Erik Walden also missed practice on Thursday and there’s a chance the high ankle sprain that he suffered against Chicago two weeks ago, could keep him out of Sunday’s game.  McCarthy said Walden’s playing Sunday is up in the air right now.

If Walden can’t go, then Frank Zombo would likely get a start.  Zombo returned to practice last weekend from injury.

AUDIO: Mike Clemens reports from the Super Bowl in Dallas :42