You are here: Home / Packers / Rodgers looks forward to the big game (AUDIO) 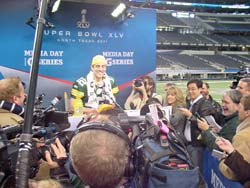 Bowl at age 27.  Aaron Rodgers just happens to be 27 years old and he’ll lead his Green Bay Packers into battle against the Pittsburgh Steelers and Super bowl 45 on Sunday.

Reporters at yesterday’s Super Bowl Media Day buzzed Rodgers with questions about Brett Favre.  Rodgers tried to tell them that Favre is not his motivation for wanting to win the Super Bowl on Sunday.

Rodgers did talk about consulting quarterback Steve Young, who had to replace the legendary Joe Montana in San Francisco.

Rodgers has correspondance with former great Bart Starr as well.

AUDIO: Aaron Rodgers on his relationship with Bart Starr :15

Rodgers won’t talk much about Brett Favre and the two clearly don’t communicate.  But you know Rodgers would love to get this Super Bowl in his pocket, to alleviate the comparisons.  Rodgers also admitted that he’s not sure questions about Brett Favre will ever stop.

Rodgers and his Packers teammates are practicing today for the first time since arriving in Dallas back on Monday.