You are here: Home / Brewers / Brewers fall behind in playoffs for the first time (AUDIO)

The outstanding pitching matchup we all anticipated, never materialized on 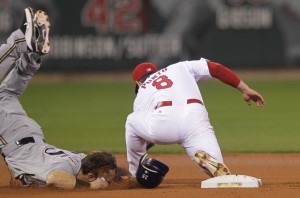 Wednesday night.  The St. Louis Cardinals jumped on Milwaukee Brewers ace Yovani Gallardo with 4-runs as they batted around in the 1st inning.  The 4-runs turned out to be enough to pull out a 4-3 victory over the Brewers.

Milwaukee trails in the series 2 games to 1.  It’s the first time they’ve trailed in a series since the playoffs began.

Ron Roenicke made a lineup change in centerfield.  With Nyjer Morgan struggling offensively, Roenicke decided to go with Mark Kotsay in center field, instead of Carlos Gomez.  He sacrificed defense for offense.  Kotsay did homer in the contest, but he also struggled defensively, failing to get to a fly ball to center that Gomez would have easily caught.

To make matters even worse, Kotsay (pictured) was doubled off of second base when he got too far off of second on a line drive to center field.

AUDIO: Ron Roenicke on Kotsay getting doubled off of second base :19

The Brewers were able to get 3 runs on 6-hits off of Cardinals starter Chris Carpenter, but the St. Louis bullpen slammed the door on a comeback.

AUDIO: Tony LaRussa on getting 12 outs from his bullpen :16

The Brewers are in a must win situation going to game 4 tonight.  Since the seven-game format was introduced in 1985, only five teams who fell behind, 2-1, in the NLCS advanced to the World Series.

Randy Wolf, who has struggled of late for the Brewers, will get the ball in game 4 tonight.  Kyle Lohse pitches with 12-days rest for the Cardinals.