You are here: Home / Brewers / Brewers throttled by Cards on opening day 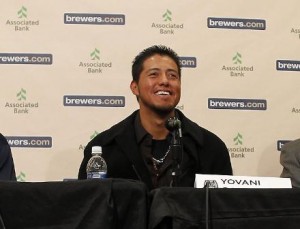 opener.  The Cardinals clubbed four home runs off of Brewers starter Yovani Gallardo on the way to a 11-5 win over Milwaukee at Miller Park.

The Brewers jumped out to a 2-0 lead, but Gallardo couldn’t hold it, quickly surrendering the lead before being chased in the fourth.

Gallardo is now 0-3 in opening day assignments.  Against the Cardinals, Gallardo is 1-8 with a 6.17 ERA in 12 career regular-season starts.

David Freese, Yadier Molina, Carlos Beltran and Matt Holliday all homered off of Gallardo, who lasted only 3 2/3 innings, giving up seven hits and six runs with five walks and three strikeouts.

The Cardinals pounded out 16-hits against Brewers pitching in all, picking up their second win of the season.

The Brewers collected 10 hits in the loss.  Rickie Weeks, Carlos Gomez, Matt Gamel and Jonathan Lucroy all had 2-hit days for the Brewers.

Zach Greinke pitches game two of the series for the Brewers today.  Adam Wainwright goes for the Cardinals.