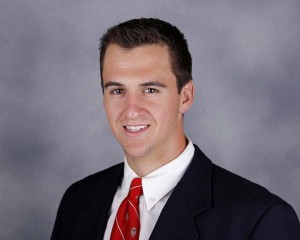 finally here.  Kerdiles has been serving a 10-game NCAA suspension for a violation of the organization’s amateur rules regarding impermissible benefits.

His appearance in the Badger lineup tonight couldn’t have come at a better time.  Wisconsin has struggled to a 1-7-2 start, 1-5-2 in the WCHA.

Wisconsin coach Mike Eaves is excited to have Kerdiles back, but he also wants to make sure the Kerdiles doesn’t try to carry the team on his back and everyone needs to chip in.

AUDIO: Mike Eaves says everyone needs to help get them going :13

Wisconsin is riding a 7-game winless streak (0-5-2), but the Badgers are hoping Kerdiles gives them a shot in the arm.  Kerdiles is a second round pick by the NHL’s Anaheim Ducks.

Denver is 9-3 overall, 7-1 in the WCHA and ranked fifth in the country under longtime coach and former Badger George Gwozdecky.  But the Pioneers lost a pair at home last weekend to Yale and New Hampshire.

Faceoff time in the first of the two-game series tonight is 9pm and can be seen on the NBC Sports Network.  Saturday’s faceoff is 8pm with no television.