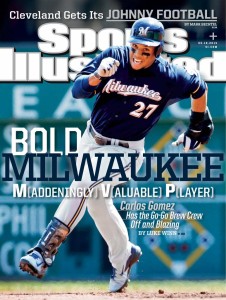 Milwaukee Brewers center fielder Carlos Gomez has landed a spot on the cover of Sports Illustrated.  The cover is regional and features a story written by the magazine’s Luke Winn (Fort Atkinson native).

Winn was in Milwaukee last week to interview Gomez, as well as some of his teammates about him.

It marks the first time a Brewer(s) has appeared on the cover of Sports Illustrated since Ryan Braun, Prince Fielder and Nyjer Morgan graced the cover on Aug. 29, 2011.

Gomez is currently awaiting word on a pending three-game suspension for his role in a brawl with the Pirates last month.