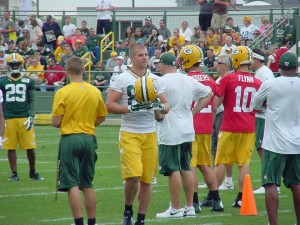 Jordy Nelson is a happy man after he signs new 4-year contract.

Jordy Nelson has quickly become one of the current faces of the franchise.  The Green Bay Packers rewarded him for that and his ability to catch footballs on the field, signing him to a four-year contract worth $39 million that includes $14.2 million in guaranteed money.  His signing bonus is just over $11 million.

Nelson told his teammates at practice that he’s going to be around for four more years and went out and dominated practice.

Nelson’s deal is better than the $8 million a year that Atlanta gave Roddy White.  White is 33-years-old.  Nelson is 29.

Nelson was in the final year of a three-year, $12.6 million deal that was set to pay him $2.55 million in base salary.  Nelson will now be under contract until 2018.

Nelson had 85 catches last season for 1,314 yards and eight touchdowns to lead the team.

AUDIO: Nelson said it’s not about worth, it’s about value :08

Now the Packers will be looking to lock up fellow receiver Randall Cobb.  Like Nelson, Cobb is entering the final year of his contract as well.