You are here: Home / Packers / Packers decide not to pick up Perry’s option year 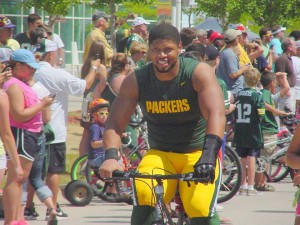 The Green Bay Packers have decided not to pick up the fifth-year option on OLB Nick Perry’s rookie contract.

The Packers would have been on the hook for more than $7 million in 2016 had they executed the option.  The team instead will pay Perry’s base salary of more than $1.4 million in 2015, which will be the final year of his deal.

Because of injury, Perry has played in 32 out of a possible 48 regular-season games.  But Perry played his best football last season, appearing in all but one game.  He totaled 4.5 QB sacks.

All first-round picks in 2011 or later signed four-year deals with a club option for a fifth year.  It was a provision added to the CBA following the lockout after the 2010 season.

In the two affected seasons, the Packers have declined options on Perry this year and Derek Sherrod last season.

If Perry plays well, it is possible the Packers could try to resign him to a new deal for next season.  If they don’t, Perry would become an unrestricted free agent.