You are here: Home / Badgers / Three Badgers up for top college football honors 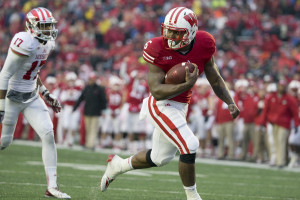 One of 12 Big Ten players named to the Maxwell Award list, Clement is also among 35 running backs who enter the season vying for the award.

Clement rushed for 949 yards and scored 11 total touchdowns for the Badgers last season.  He has gained 1,496 yards in his first two seasons at Wisconsin, averaging 7.0 yards per carry.

Biegel and Caputo made their debut on the watch list for the Bednarik Award, presented annually to college football’s outstanding defensive player.  The pair of defensive standouts helped UW to rank No. 4 nationally in total defense at 294.1 yards per game and No. 17 in scoring defense at 20.8 points a game.