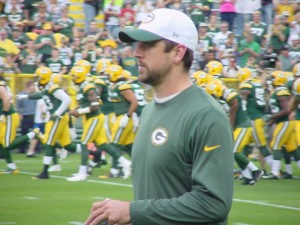 Green Bay Packers quarterback Aaron Rodgers has already served  notice that he doesn’t like four preseason games, calling them “meaningless games”.  Rodgers isn’t going to like it if the Packers have to play a fifth preseason game next year.

With Brett Favre a shoe-in for induction into the Pro Football Hall of Fame in 2016, there’s a good bet the NFL will include the Packers in their 2016 Hall of Fame game.

That prospect has Rodgers lobbying in advance, to not play in  that game.

Rodgers called preseason games “meaningless” back in August, after the Packers top receiver, Jordy Nelson was sidelined with a season-ending knee injury.

The NFL likes to tie teams to the induction ceremony.  With Favre a virtual guarantee to headline that 2016 class, the NFL may come calling.  What does it mean for Packers fans?  Perhaps a third exhibition that will see Rodgers standing on the sidelines in street clothes.