You are here: Home / Sports / Anderson voted AP Player of the Year 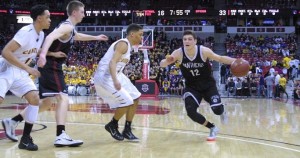 Anderson will play collegiately for the Green Bay Phoenix beginning next season.

Waupun coach Dan Domask, leading the Warriors to a Division 3 state title in the schools first ever trip to the state tournament, was named the boys Coach of the Year.  Waupun beat Appleton Xavier 59-58 in the Division 3 championship game.

Anderson and his teammate, 6’6 Sam Hauser, were the only two players voted as unanimous selections to the all-state first team.  Hauser will play his college ball starting next season at Marquette.