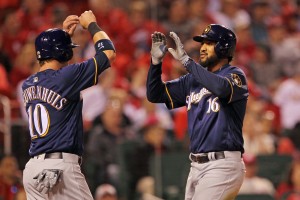 Domingo Santana delivered a two-run home run to center field off of closer Trevor Rosenthal, leading the Milwaukee Brewers to a 6-4 win over the St. Louis Cardinals at Busch Stadium on Wednesday night.

The 440-foot, 2-out blast to center came off of a 98 mph fastball and was Santana’s first home run of the season.

Jonathan Lucroy had a three-hit night and drove in two runs to help the cause.

The Cardinals had just tied the game in the 8th inning when pinch-hitter Brandon Moss clubbed a home run off of Brewers reliever Michael Blazek.  That took a win away from Brewers starter Chase Anderson, who allowed three un-earned runs in the first inning and departed after six innings with a 1-run lead.  Anderson didn’t get the win, but he hasn’t allowed an earned run over his first 11 innings of the season.

Santana’s home run gave Blazek the win in relief.  Jeremy Jeffress worked the ninth inning and earned his 4th save in as many tries.

The Brewers evened the series at a game apiece.  The series finale will be played this afternoon at Busch Stadium.

AUDIO: Craig Counsell on Santana’s HR off of Trevor Rosenthal :10

AUDIO: Craig Counsell is excellent in his role at the plate :12