You are here: Home / Brewers / Anderson loses fourth in a row 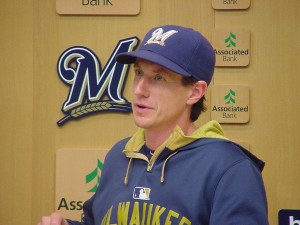 After two starts without giving up an earned run, Milwaukee Brewers right-hander Chase Anderson has dropped four straight games, the latest a 9-5 defeat at the hands of the Cincinnati Bengals at Great American Ballpark.

After the game, manager Craig Counsell said he had no intention of removing Anderson from the starting rotation.

The Brewers had no answer for Reds starter Alfredo Simon.  He entered the game with a 0-3 record and 13.50 ERA.  But Simon became just the second Reds starter to go at least seven innings this season, leaving with two outs in the eighth after Presley’s two-run homer.  He allowed three runs on seven hits with a walk and five strikeouts on the night.

Carter’s blast, his 10th of the season, came in the ninth inning.

Wily Peralta was scheduled to start game two of the series tonight, but he has left the team to be with his wife, who gave birth to the couple’s daughter.  Peralta will return to the Brewers in time to start Monday night’s game in Miami.

Right-hander Tyler Cravy was called up from Triple “A” Colorado Springs to start Friday night’s game and will return to the Sky Sox afterwards.