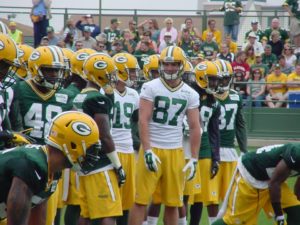 As it turned out, Green Bay Packers wide receiver Jordy Nelson didn’t start Training Camp on the P.U.P. list because of the ACL injury he suffered a year ago.  Nelson instead suffered a minor setback when he hurt his left knee during offseason workouts.

Nelson described the injury as a “hiccup” and wouldn’t say when the injury happened.  But Nelson said it isn’t something he expects to keep him out of the Packers September 11 season opener against Jacksonville.

“I just want to make sure everyone knows the ACL is good.  My ACL is fine.  We’re not worried about that,” said Nelson.

Nelson said the only timetable is Week 1, so he’s unclear when or if he will return during the preseason.

Nelson said it’s difficult to predict  how long it will take him to get into rhythm with quarterback Aaron Rodgers, depending on home much of training camp he ends up missing.

AUDIO: Jordy Nelson on being slowed by a second knee injury :21

AUDIO: Aaron Rodgers on how much time he’ll need with Nelson :16