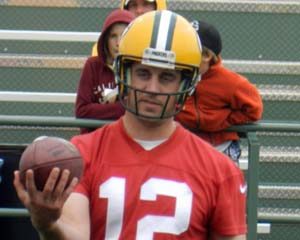 Green Bay Packers quarterback Aaron Rodgers is expected to make his preseason debut on Friday night when they face the 49ers in exhibition play in San Francisco.

Aaron Rodgers isn’t sure how much he’ll play, but it is expected to be his only appearance of the preseason.

Earlier in training camp, Rodgers said he felt prepared to face Jacksonville in the season opener on Sept. 11.  Tuesday, he said making sure he keeps up with his conditioning is the most important factor.

AUDIO: Aaron Rodgers on the importance of conditioning :20

“I’ve just got to be ready to go four quarters,” Rodgers said.  “I’m confident that with the work I’ve put in, in the offseason and the work this past month in camp, I’ll be ready to go once the season starts.”

A number of offensive assistant coaches have stated that it is beneficial for the starting quarterback to get some snaps during preseason games.  But clearly, the Packers would like to avoid potential injury, at all costs.

Rodgers certainly is concerned about timing and tempo.

Without Rodgers on the field in a preseason game, the Packers haven’t been able to evaluate their starting offense.  That will change on Friday night at San Francisco, although it isn’t certain how much Rodgers will play.

While Rodgers will get work, wide receiver Jordy Nelson won’t.  In fact, Nelson may not play in the preseason finale at Kansas City in two weeks either.

Rodgers said the six practices with Nelson, prior to the season opener, will be enough for the two get back on the same page.