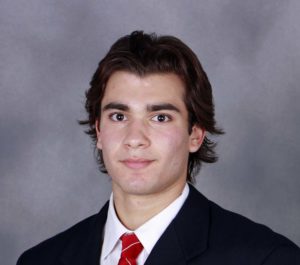 The Chesterfield, Missouri, native returns to the Badgers for his sophomore season after getting chosen 15th overall by the Minnesota Wild in this past summer’s NHL draft.  He paced the Badgers last season with 19 goals.  His 32 points ranked second on the squad and helped him earn a spot on the 2016 Big Ten All-Rookie Team.

Besse spent last season as an alternate captain as well.  he is UW’s leading point scorer the past two seasons.  He posted 11 goals in each of the last two years, collecting 22 points as a sophomore and 33 points as a junior.

The Plymouth, Minnesota native is a fifth-round draft pick of Anaheim from 2013.

Hughes served as alternate captain last season during the absence of teammates from the lineup.  He now takes on the role full-time.

Hughes finished with five goals and 20 assists for 25 points in 32 games last season.  He is a 2015 NHL draft pick of the Boston Bruins, who took him in the sixth round.