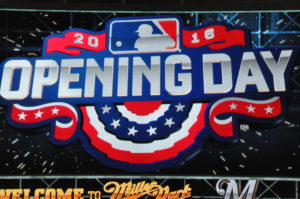 The Milwaukee Brewers fell behind early, fought back to take the lead, then some sloppy defense and untimely hitting cost them in a 7-5 Colorado Rockies victory in the 2017 season opener at Miller Park.

Starting pitcher Junior Guerra left the game in the bottom of the third, suffering a calf strain while running to first base after a sacrifice bunt.

By the time the Brewers came to bat in the fifth inning, they were behind 4-0 and Rockies starter Jon Gray had already recorded seven strikeouts.

But the Brewers put five runs on the board in the fifth, getting run scoring doubles from Jonathan Villar, Eric Thames and Travis Shaw to take a 5-4 lead.

But the lead was brief for the Brewers because of poor execution.  Villar failed to turn an easy double play when he bobbled the ball at second base in the 7th inning, as the Rockies scored two runs to retake the lead.  The second run in that inning came when Villar was late covering second base on a steal and catcher Jett Bandy’s threw the ball away for an error.

The Brewers looked like they were going to come back in the 8th inning when Rockies reliever Adam Ottavino walked Domingo Santana and Keon Broxton.  The two Brewer base runners executed a double steal to move up to second and third with nobody out.  But Ottavino struck out Bandy, Orlando Arcia and pinch hitter Hernan Perez to end the threat.

The game marked the fourth time the Brewers and Rockies met on opening day, all of them at Miller Park.  Colorado is now 3-1.

The Brewers and Rockies play game two of the series on Tuesday night (6:40 p.m.).  The Brewers send Zach Davies to the mound against the Rockies Tyler Anderson.

AUDIO: Craig Counsell on losing Junior Guerra in the third :12