You are here: Home / Packers / Packers select DB Kevin King with first selection in the draft 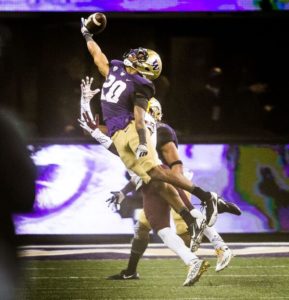 The Green Bay Packers used their first selection in the draft on a defensive player for the sixth consecutive year when they selected University of Washington defensive back Kevin King (#20).

King’s selection comes on day two of the draft, the first pick of the second round.  With the Packers defense ranked 31st in passing yards a year ago, general manager Ted Thompson decided the time is now to fix the problem.

The Packers are in dire need of a number one corner after losing Sam Shields to a concussion in the first game of the season at Jacksonville and he never recovered, spending the season on injured reserve before being released.

The Packers traded out of the first round with Cleveland on Thursday, gaining the Brown’s second round selection (#33) and their fourth round pick.

At 6’3, King is easily their tallest corner.  His combination of size and speed is the reason why the Packers liked King all along, not to mention his versatility.  He started out at Washington as a safety before making the switch to corner.

AUDIO: Eliot Wolf asked if they considered trading back again :08

AUDIO: Eliot Wolf on the prospects of King helping this season :14