You are here: Home / Brewers / Brewers in first place on Memorial Day (AUDIO) 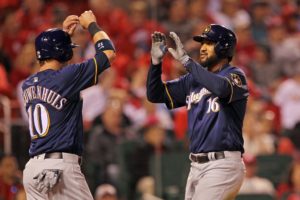 Jimmy Nelson struck out 10 over seven innings and Domingo Santana clubbed his first career grand slam to lead the Milwaukee Brewers to a 9-5 win over the Arizona Diamondbacks at Miller Park.

It’s the second straight win for the Brewers, after a season long five-game losing streak.  They moved back in first place, a game and a half in front of the Chicago Cubs and St. Louis Cardinals atop the NL Central Division.

Santana, after hitting under .200 in April, has responded in May with a .333 average, including four doubles, two homers, 15 RBI in 23 games.

Nelson (3-3) fell one shy of matching his career high for strikeouts.

Jacob Barnes pitched a scoreless ninth to earn his second save of the season.

AUDIO: Jimmy Nelson on the Brewers being in first place on Memorial Day :14