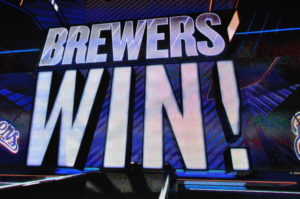 After suffering back-to-back losses to the Dodgers, games they should have won, the Milwaukee Brewers bounced back on Sunday with a 3-0 win at Miller Park, salvaging the final game in their series.  The Brewers remain one game in front of the Cubs atop the National League Central Division.

Zach Davies pitched six-plus innings of shutout ball and this time, the Brewers bullpen held strong.  Corey Knebel struck out the side in the ninth inning to nail down his fifth save.

Davies allowed just three hits and a walk while striking out six, improving to 6-3 on the season.

Oliver Drake, Jacob Barnes and Knebel finished up for the Brewers 30th win of the season.

The Brewers have now outscored their opponents 53-17 in the first inning of games this season.  They’ve also led in 49 of their 57 games, which leads the National League.

AUDIO: Corey Knebel on the Brewers rebounding after tough losses :20