You are here: Home / Brewers / Garza struggles in Brewers loss to Cardinals 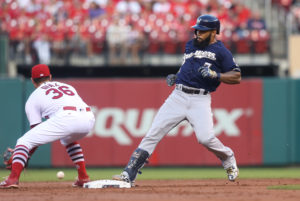 Travis Shaw booted a ground ball in the first and Manny Pina dropped an underhand toss from Garza at the plate with a walk sandwiched in between, costing the Brewers a run.  Luke Voit followed with a ground ball to the left side.  Orlando Arcia got the forceout at second but Neil Walker’s attempt at a double play was late.  Two Cardinals scored on the play as Eric Thames’ throw home was late and St. Louis was off to a 3-0 lead.

The Brewers got a run back on Eric Thames 28th home run of the season, but the Cardinals broke the game open with four runs in the fourth inning.

Major League rosters can be expanded on Friday and the Brewers have some options.  Brent Suter will make a rehab appearance with Class A Wisconsin this week and Junior Guerra has pitched well at Colorado Springs since being demoted by the Brewers.  Right-hander Brandon Woodruff also pitched a simulated game at Class AA Biloxi on Monday and is expected to rejoin the Brewers rotation this weekend.