You are here: Home / Archives for Doug Pederson 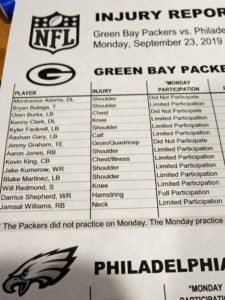 Even though the Green Bay Packers and Philadelphia Eagles won’t practice today (Monday), both teams were required to post injury reports.

The Packers have a total of 14 players on this week’s report, including veteran tight end Jimmy Graham.  Graham was listed on the report last week with a groin injury but played in the Packers 27-16 win over the Denver Broncos.

On today’s injury report, Graham is also listed with a Quadricep injury as well.

The Eagles have a total of 12 players on their injury report, including wide receiver Alshon Jeffery.  Jeffery left the Eagles week two game with a calf injury and missed all of last weeks practice.

Coach Doug Pederson told reporters that he’s hoping to have Jeffery back on the field this week and is hopeful that he can play against the Packers on Thursday night.