You are here: Home / Archives for Linc Darner

The Panthers had a couple of chances at the end of the game, with the Phoenix leading by two.  Brock Stull and Austin Arians missed three-pointers in the final eight seconds. END_OF_DOCUMENT_TOKEN_TO_BE_REPLACED

Jaelan Sanford hit a buzzer beating three-pointer to lead the Toledo Rockets to a 71-69 win over the Green Bay Phoenix on Sunday at the Resch Center.

Green Bay led 68-62 with 3:49 left to play, but Toledo’s Jonathan Williams made another three-pointer and Nathan Boothe converted a three-point play with 1:29 left.

Boothe had 27 points on 11-of-14 shooting to lead the Rockets (6-2).  Toledo coach Tod Kowalczyk won in his return to Green Bay, coaching against a Phoenix team that he once coached for eight seasons.

Jordan Fouse had 15 points, 13 rebounds and five steals for Green Bay, which saw its four-game win streak come to an end. 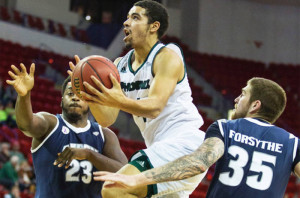 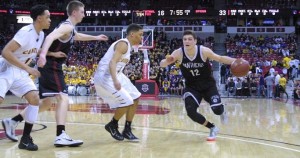 Anderson told WisSports.net that it came down to Green Bay and South Dakota State, but he had been leaning towards Green Bay. END_OF_DOCUMENT_TOKEN_TO_BE_REPLACED 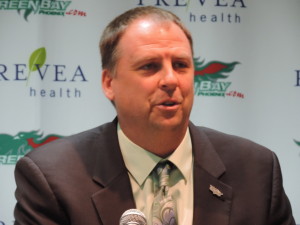 Gillespie offered the job to Darner on Tuesday and he accepted.  He was introduced at a news conference this morning.  The reason for the 1-day delay?  Darner thought it was most appropriate that he return to Florida to tell his players that he would be leaving for his dream of coaching Division 1 college basketball.  It’s another quality trait that Darner possesses, insuring Gillespie that she picked the right man for the job. END_OF_DOCUMENT_TOKEN_TO_BE_REPLACED

Linc Darner has been named the seventh head coach in Green Bay men’s basketball program history.  Darner is a 13-year head coaching veteran with 292 wins and a career winning percentage of over .700.  Darner led Florida Southern to the 2015 NCAA Division II National Championship.