You are here: Home / Archives for Nick Noskowiak 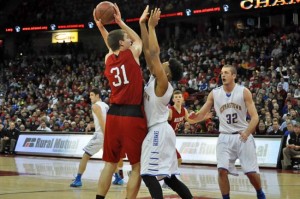 Thursday night, Noskowiak tweeted, “It is a Done Deal, no person I trust more on this earth than my future head coach!! We are in GREAT hands Marquette fans!!”

Noskowiak will be a senior at Sun Prairie high school this coming season.  He can sign a national letter of intent in November.

In a story first reported by the Wisconsin State Journal, point guard Nick Noskowiak from Sun Prairie, who verbally committed in April to Marquette, is going to open up his recruiting process after Marquette hired Steve Wojciechowski earlier this week.

Noskowiak isn’t eligible to sign a scholarship until November, so he didn’t need Marquette’s permission to look around.  Noskowiak told the State Journal that he has spoken to Wojciechowski by phone.