You are here: Home / Archives for Phoenix women’s basketball 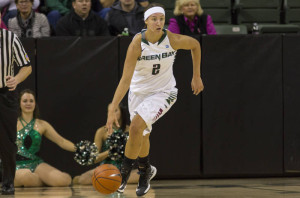 Mehryn Kraker drained five 3-pointers and shot 8-of-16 en route to a game-high 21 points. Kaili Lukan added 17 points and Tesha Buck 14. Buck finished 1-of-9 from beyond the arc. END_OF_DOCUMENT_TOKEN_TO_BE_REPLACED

The Green Bay Phoenix women dominated the Wright State Raiders 71-44 on Saturday.  The Horizon League Preseason Player of the Year, Kim Demmings of Wright State, was held to three points in a strong defensive performance from the Phoenix women.

Green Bay put the game away early, taking a 36-15 lead at the break.  The Phoenix outscored Wright State 36-8 in the paint.

UW-Green Bay was led in scoring by Sarah Eichler who scored 24 points and pulled down 7 rebounds.  Eichler is closing in on 1,000 career points.  Yesterday’s performance put here at 924 career points.

The Phoenix is now 2-0 in Horizon League play, and hits the road for the next four games.  The first of those four is at Cleveland State on Thursday night.

The Phoenix women (10-2) wrapped up their non-conference games with a strong defensive performance, holding St. Bonaventure to a shooting percentage of under 30.

The first half saw a big 12-0 run from Green Bay starting with 7:56 to go.  Senior Adrian Ritchie started the run off with a three-point shot to make the game 21-12.  When halftime hit, Green Bay comfortably led 32-15.

The Phoenix women were led in scoring by Breannah Ranger with 14 points, and was one of three players to hit double-digits.  Lydia Bauer scored 13 points, and Stephanie Sension scored 12 on the night.

Green Bay’s Bauer led the team in rebounding with eight, and Kaili Lukan and Adrian Ritchie each had five rebounds for the game.

For St. Bonaventure, Katie Healy led the team in scoring with 16 points, and Nyla Rueter scored 11.  Healy and Jordan McGee each had five rebounds.