You are here: Home / Archives for Russ Feingold

With U.S. Senator Herb Kohl (D-WI) stepping down in 2012, Democrats spent much of their convention this weekend talking about who will run in his place.

One of the top contenders is former U.S. Senator Russ Feingold, who says a decision has not been made yet. Feingold, who lost his seat in 2010 to Republican Senator Ron Johnson, says he’s been talking with a lot of people about a possible run and he has to decide if a return to politics now is the right thing to do. END_OF_DOCUMENT_TOKEN_TO_BE_REPLACED

Wisconsin’s senior U.S. Senator is making the case for keeping his colleague in office.

Senator Herb Kohl (D-WI) was on the campaign trail Monday in Milwaukee for fellow Democrat Russ Feingold. Kohl says Feingold has passed every test for being effective and accessible to the people of the state, and deserves to continue serving the people of Wisconsin. END_OF_DOCUMENT_TOKEN_TO_BE_REPLACED

U.S. Senator Russ Feingold says cutting off embryonic stem cell research would be an inhuman thing to do.

Feingold is attacking Republican opponent Ron Johnson over his opposition to embryonic stem cell research. The Middleton Democrat says Johnson’s support for ending federal funding for the work going on in Wisconsin would drive high tech jobs out of the state, into other states and countries where funding is easier to find. END_OF_DOCUMENT_TOKEN_TO_BE_REPLACED

He says many of them are done by national groups that do quick polls all over the country. Feingold says the people’s he’s working with show him at least tied with Johnson or possibly even a little ahead. END_OF_DOCUMENT_TOKEN_TO_BE_REPLACED

The Republican and Democratic U.S. Senate candidates in Wisconsin hold their second debate tonight in Wausau.

Democrat Russ Feingold and Republican Ron Johnson will square off for the second time in four days at the UW Marathon County campus. END_OF_DOCUMENT_TOKEN_TO_BE_REPLACED

The attacks from both sides echoed many of the campaign ads that have filled the airwaves for the past several months, as the two candidates vying for one of Wisconsin’s U.S. Senate seats met Friday night in their first debate.

The debate between incumbent Democrat Russ Feingold and Republican challenger Ron Johnson saw both candidates take questions on a wide range of topics, including health care, Social Security, energy policy, and the war in Afghanistan. END_OF_DOCUMENT_TOKEN_TO_BE_REPLACED

With many of them holding “Feingold for Senate” signs, about 80 people attended what was billed as a “Get out the Vote” rally Monday on the lawn of Racine’s City Hall.

Feingold told the crowd not to be discouraged by the polls that show Republican Ron Johnson in the lead, saying other polls show a different story. He says the GOP is counting on Democrats staying home on Election Day, and he expects them to be proven wrong in November. END_OF_DOCUMENT_TOKEN_TO_BE_REPLACED 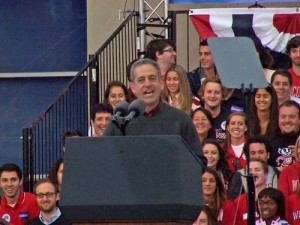 Despite widespread reports that U.S. Senator Russ Feingold (D-WI) would not be in Madison Tuesday for President Obama’s visit, the Wisconsin Democrat was able to make it back in time.

Feingold was expected to miss the rally on the UW-Madison campus due to votes going on in the Senate Tuesday. However, Feingold indicated late that afternoon through twitter that he was done voting and would make it back after all. END_OF_DOCUMENT_TOKEN_TO_BE_REPLACED

Feingold has accepted invitations to six candidate debates, and wants the eventual Republican nominee to join him. The Wisconsin Democrat says such debates are part of the Wisconsin tradition, and TV ads alone should not be used to decide the election.

Feingold will likely face Oshkosh businessman Ron Johnson, who is seen as the Republican front-runner heading into the primary. Johnson, Dave Westlake of Watertown and Stephen Finn of Milwaukee are all seeking the GOP nomination in next Tuesday’s primary.

Johnson has run several negative ads attacking Feingold as a career politician, which the Senator says he would look forward to addressing. Feingold says he’d like him to explain to his face why being a career politician makes him unworthy to continue to serve in the Senate.

The debates could take place in several locations around Wisconsin. Invitations he’s accepted include for debates in Eau Claire, Milwaukee, Wausau, Oshkosh, and Madison.

Johnson’s campaign says the candidate looks forward to debating Senator Feingold, if he wins the nomination. However, a spokeswoman would not comment on a specific number of debates Johnson would be willing to participate in.

An effort is underway to get a former U.S. Senate candidate’s name back on the ballot. A website launched this week is urging voters to support Terrence Wall in the Republican primary later this month, by pledging to write-in his name on the ballot.

Wall dropped out of the race earlier this summer after Oshkosh businessman Ron Johnson received the Republican endorsement. The Madison-area developer says he has nothing to do with the write-in effort. END_OF_DOCUMENT_TOKEN_TO_BE_REPLACED