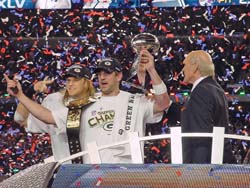 Aaron Rodgers with Trophy and Belt

The Packers pulled out the victory, despite missing two of it’s leaders for the entire second half, Charles Woodson (broken collarbone) and Donald Driver (severe ankle sprain).  In addition, cornerback Sam Shields missed a good portion of the second half with a shoulder injury and safety Nick Collins missed time due to cramping.

It was fitting the way the Packers won the game, because they’ve had to battle through injuries all season long.  Now they had to figure out a way to make it through the Super Bowl with more backups stepping into the lineup.  Playing both Jarrett Bush who collected an interception of Brad Roethlisberger and Pat Lee for much of the second half, Defensive Coordinator Dom Capers took his team out of man to man coverage and played all zone in the second half to help out Bush and Lee.

The Packers defense forced three Steeler turnovers and scored on all three.  Offensively, Aaron Rodgers was named the Super Bowl MVP, throwing for 304 yards and three touchdowns.  He had a quarterback rating of 111.5.  Two touchdown strikes went to Greg Jennings (4 rec. 64 yds) and one to Jordy Nelson (9 rec. 140 yds).

The victory means the Packers add a fourth Super Bowl Trophy to their trophy case.  They now have 13 NFL titles in all, that’s four more than the Chicago Bears.