You are here: Home / Packers / Packers aim for quick start to new season with new faces 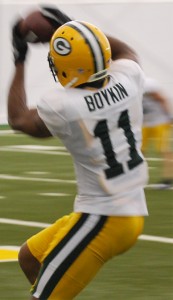 The start of September brings around many new events including the road to fall, the start of school, and most importantly, the start of a new Green Bay Packers season.

The final 53-man roster is set and to the surprise of some, there are six wide receivers.  Five of the six are household names for Packer fans, but one name sounds foreign to some.  Jennings, Driver, Nelson, Cobb, and Jones make up the household names while Jarrett Boykin is the extra.

Originally undrafted, Boykin was signed by the Jacksonville Jaguars May 4th, but was waived three days later.  After trying out for the Packers, he signed May 14th.  The rookie wide receiver set receiving records during his time at Virginia Tech.

The depth and quality in the Packer’s wide receiver position is contested by few in the NFL, and Boykin made an impact in the preseason to rightfully earn a spot.  He led the Packers with 13 catches, 166 yards receiving, and one touchdown.

His huge hands plus great natural instinct, gives Jarrett a chance to shine and make a name for himself. Jordy Nelson has nothing but good things to say about the rookie, praising his work ethic.

Nelson, Boykin, and the other Packers wish to re-create the quick start they got against former Super Bowl champions, the New Orleans Saints.  Last year, the Packers opened their season defeating the Saints 42-34, which saw the Packers score 21 points in the first quarter and Rodgers throw for over 300 yards and three touchdowns.

This Sunday, the Packers face the team that lost to the New York Giants in the NFC Championship last season, the San Francisco 49ers.

Jordy Nelson talked about the quality of the 49ers defense saying, “…it’s a very good challenge.  They are one of the best, if not the best, in the league.”

When asked about starting two consecutive seasons off with possible NFC Championship matchups, Nelson pointed how it is good to start the season with a game against a “big team.”

Audio: Jordy Nelson talks about playing in a “big game” :12

While it may be a big game for all involved, Coach Mike McCarthy feels confident with the team’s rhythm and timing due to the positive performances of the last two preseason weeks and Monday’s practice.

This Sunday, the Packers start the road to the Superbowl by hosting the San Francisco 49ers at Lambeau Field.