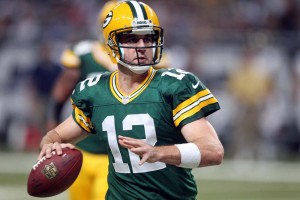 Field, grinding their way to a 31-13 win over the Cleveland Browns on a rainy Sunday afternoon.

The Packers were already playing without six difference starters due to injury.  Then they lost tight end Jermichael Finley in the 4th quarter.  But the Packers still figured out a way to get it done.

Aaron Rodgers threw for 260 yards and three touchdowns.  Eddie Lacy ran for 82 yards and a score and wide receiver Jarrett Boykin caught 8 passes for 103 yards and his first NFL touchdown.

AUDIO: Aaron Rodgers on holding things together when guys go down :16

AUDIO: Aaron Rodgers asked why they are so good playing short :18

The Packers made a conscious effort to get Boykin more involved right from the start.  Cleveland had committed their top cover corner, Joe Haden to the Packers top wide receiver Jordy Nelson all day, so the Packers went the other way.

Nelson finished with five catches for 42 yards and a 1-yard TD catch.  Nelson came into the game averaging 17.9 yards per catch and averaged just 8.4-yards yesterday.

The Packers are now turning their attention to this Sunday nights game against the Minnesota Vikings at the Metrodome.  But many questions still remain, such as how long will Jermichael Finley be out and will the Packers get any of their injured players back in time for the Vikings game.