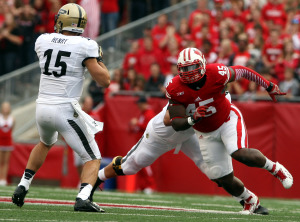 The Badgers have only allowed four sacks, which is tied for first.  But they don’t throw it as much as most Big Ten teams, relying more on the running of Melvin Gordon and Corey Clement.

Joel Stave took all but one series in the Badgers previous win over Illinois two weeks ago.  With an extra week of practice, Stave should be better than his 7 for 14, 73 yard performance.  The Badgers could incorporate Tanner McEvoy in the game plan a little more as well.

The Badgers also used the bye week to get healthy.  Wisconsin’s defense welcomes back linebacker Marcus Trotter, DL Warren Herring and safety Lubern Figaro.  Fullback Derek Watt could return on offense as well.  The Badgers are as healthy as they’ve been since the season opener against LSU.

That defense will be tasked with holding Maryland’s dual-threat quarterback C.J. Brown in check.

Maryland is 5-2 overall, with their only losses coming at the hands of Ohio State and West Virginia. both ranked in the top 25.  The Badgers have fallen out of the top 25 and enter with a 4-2 overall record.