You are here: Home / Packers / Packers not challenged in win over Carolina 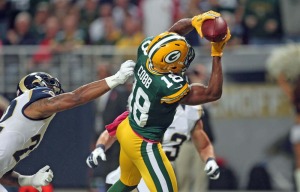 The Carolina Panthers won the coin toss and then deferred to the second half.  After that, the visitors didn’t know what hit them.

The Green Bay Packers scored the games first 28 points, 21 of those points in the first half, on the way to a 38-17 victory at Lambeau Field on Sunday.

In that first quarter, the Packers out-gained the Panthers 172-5 and piled up a dozen first downs to one for Carolina.  Jordy Nelson put up the first touchdown of the game, a 59-yard catch and run to put the Packers in front 7-0.  Eddie Lacy and James Starks added touchdown runs of 5 and 13 yards as the Packers went up 21-0 in the first quarter.

Randall Cobb added a three-yard touchdown reception in the second quarter and finished with 6 catches for 121 yards.

AUDIO: Randall Cobb on his recent play after a slow start :14

Carolina didn’t put their first points on the board until Graham Gano booted a 33-yard field goal as time expired to end the first half.  The Packers took a 28-3 lead into the locker room at halftime.

Carolina finally put a touchdown on the board in the fourth quarter with a Kelvin Benjamin 13-yard touchdown reception from Cam Newton.  The Panthers added another touchdown late as both teams had mostly backups on the field.

Aaron Rodgers finished 19 of 22 for 255 yards and three touchdowns.  He now has 18 touchdown passes and only one interception for the season.  Rodgers has gone six straight games without a pick, tying the legendary Bart Starr for the franchise record.

A sign that the Packers passing game is starting to come around is the variety in receivers Rodgers threw to on Sunday.  Nine different receivers caught passes on Sunday.  That’s a first this season.  When Aaron Rodgers won the MVP award in 2011, he completed passes to 9 or more receivers in a game seven times.

Defensively, the Packers not only contained Cam Newton, but they got after him as well.  They sacked Newton three times with Julius Peppers collecting 1 1/2.  Casey Hayward also picked off a pass for the second time in as many games.

It’s the fourth straight win for the Packers (5-2), who remain tied with Detroit (5-2) atop the NFC North.  The Packers will wrap up the first half of the regular season this coming Sunday night against the Saints in New Orleans.

AUDIO: Mike McCarthy on the win :09