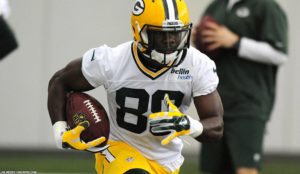 Barrington returns after missing nearly 11 months with a foot injury that he suffered in the season opener a year ago.

The Packers made a roster move on Tuesday, signing long snapper Jesse Schmitt, a former Purdue long snapper who tried out with the Packers back in May.

The Packers have been concerned about Rick Lovato’s uneven performance through the first two weeks of training camp.

Former starter Brett Goode could also be an option.  The veteran free agent is recovering from ACL surgery and is reportedly getting close to full strength.

To make room for Schmitt on the roster, the Packers released linebacker Manoa Pikula, who suffered a hamstring injury early in training camp.