You are here: Home / Archives for Mark Reynolds

The 2014 season has been a struggle for Matt Garza, but the Milwaukee Brewers veteran right hander pitched his best game since the season opener.  Garza took a shutout into the seventh and helped the Brewers knock off the Minnesota Twins 6-2 on Monday night at Miller Park.

Garza allowed six hits and struck out eight to improve to 3-4 on the season.  It’s the first time in 12 starts that Garza hasn’t allowed a run.

Mark Reynolds clubbed his 13th home run of the season and Jonathan Lucroy added three-hits, including an 8th inning homer to help the Brewers in the win.  The Brewers ended a 5-game interleague losing streak.

Garza left with one out in the seventh inning and reliever Will Smith induced an inning-ending double play.

Brewer pitchers now have 40 quality starts in 58 games this season.  That’s second most in the majors.  Only the Atlanta Braves, with 41, have more. 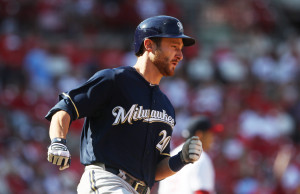 The Milwaukee Brewers bats came to life in Miami on Friday night, pulling out a 9-5 win over the Marlins.

With Ryan Braun still sidelined, Brewers manager Ron Roenicke moved Carlos Gomez into the cleanup spot, Jonathan Lucroy into the three-spot and Jean Segura into the leadoff spot.  For at least one night, the moves paid off.

Marco Estrada struggled on the mound but the offensive support allowed him to pick up the win and improve to 4-2 on the season.  Estrada served up four home runs, two to Giancarlo Stanton and two to Garrett Jones.  Estrada has now give up 16 home runs this season, which leads the Major Leagues.  In April, Estrada put together a 2.87 ERA in five starts in April.  In May, Estrada has made five starts and has a 5.16 ERA.

When you’re in a slump, you try to find ways to climb out of it.  For the Milwaukee Brewers, it meant skipping batting practice last night. 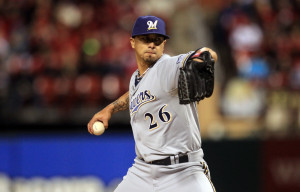 The result, a 6-1 victory over the Atlanta Braves at Turner Field.

Mark Reynolds clubbed a first-inning grand slam and Carlos Gomez added a two-run shot in the 4th as the Brewers ended a four game losing streak.

The offensive outburst gave right-hander Kyle Lohse all the offense he would need.  Lohse allowed a single run in the first inning on back-to-back doubles by Freddie Freeman and Justin Upton.  Lohse slammed the door from there, working 8-innings and striking out eight, improving to 6-1 with a 2.67 era for the season.

The Brewers improved to 4-1 when scoring at least four runs.  They’re 4-18 when failing to do so.

The Brewers aren’t sure if they’re going to have Yovani Gallardo for his next start.  Gallardo was still quite sore yesterday, after spraining his ankle in Tuesday nights loss to the Braves.  Gallardo had to leave that game in the 4th inning. 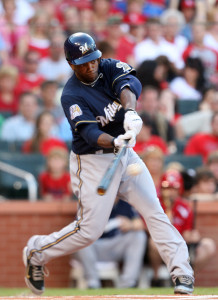 The Milwaukee Brewers finished the month of April with a 20-8 record, but they did so with a 9-3 loss to the St. Louis Cardinals.

The Brewers needed starter Matt Garza to get them deep into the game to take some pressure off of the bullpen, but that didn’t happen.  Garza suffered a right thumb contusion while hitting and worked three innings before being removed.  That meant trouble for a heavily taxed bullpen.

Ron Roenicke went with little used Rule 5 draft pick Wei-Chung Wang who was overmatched by the Cardinals.  Wang wound up allowing four runs on six hits in three innings.  It brings his total to 13 hits and 10 runs allowed in just six innings this season.

Zach Duke followed for an inning and the Brewers called on catcher Martin Maldonaldo to finish up, working a scoreless 8th inning.  Maldonado became the first position player to pitch for the Brewers since infielder Joe Inglett in July 2010.

The Brewers got off to a good start.  Home runs by Mark Reynolds and Carlos Gomez homered to give the Brewers a 3-1 lead.  But St. Louis slugger Matt Adams clubbed a long three-run homer to right to put the Cardinals up for good at 4-3.  Allen Craig also homered for the Cardinals, who salvaged the final game in the series.

The Brewers open a four-game series in Cincinnati against the Reds tonight.  Manager Ron Roenicke says there’ll likely be a roster move announced before the game.  The Brewers need more bullpen help and it could come at the expense of the rookie Wei-Chung Wang.  Because he was acquired from the Pirates in the Rule 5 Draft, if the Brewers would have to offer him back to the Pirates.

The Milwaukee Brewers, at 19-7 (.731), own the best record in the Major Leagues.  Their 19 wins are a new franchise record for the 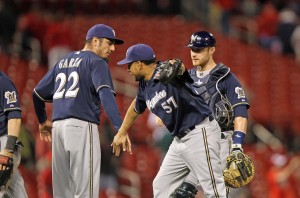 The entire pitching staff has been lights out.  The starters have posted a 2.74 ERA this season, trailing only the Braves (1.57) and Cardinals (2.32) in the Major Leagues.  The team has produced a Major League-leading 21 quality starts, including eight in a row.

The bullpen has posted a 2.18 ERA this season, trailing only the Padres (1.94) and Giants (2.13) in the Major Leagues.  opponents are batting just .195 off the Brewers bullpen, lowest in the majors.

Last night, the Brewers bullpen shut the Cardinals out over the last six innings, helping the team erase a 3-0 deficit to win in extra innings 5-3.

There’s been plenty of eye-opening performances, but none bigger than Francisco Rodriguez.  He has set a new franchise record for saves (12) in March/April, breaking the mark held by Francisco Cordero (10 in 2007).  Number 12 came in the 12th inning last night.

Khris Davis was having one of his toughest nights of his young career.  Entering his final at-bat in the 12th inning, Davis was 0 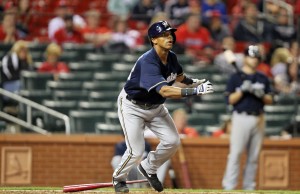 for 5 with four strikeouts.  But it was Davis’ run-scoring triple in the top of the 12th inning that led the Milwaukee Brewers to a 5-3 win over the St. Louis Cardinals at Busch Stadium.

Davis later scored on a Mark Reynolds sacrifice fly to give the Brewers the final margin of victory.

Zach Duke (2-0) picked up the win with two innings of scoreless relief and Francisco Rodriguez notched his 12th save in as many chances.  Rodriguez got Jhonny Peralta to fly out with two on to end the game.

St. Louis jumped out to a 3-0 lead when Allen Craig and Matt Holliday homered in the sixth inning off of Yovani Gallardo.  But the Brewers tied the game in the 7th by scoring three-times.  The last of the three runs coming when Aramis Ramirez was hit by a pitch by St. Louis reliever Pat Neshek.  Ramirez left the game but x-rays on his injured elbow came up negative.

The Brewers lead the majors with 19 wins and have a league best 10-1 road record.  They’ve won eight of their last 10-games.

AUDIO: Khris Davis on a tough night that ended well :11

Mark Reynolds homered in the 8th, Ryan Braun tied the game 2-2 with a 1-out solo homer in the 9th and Khris Davis won it with a solo shot in the 14th inning, giving the Brewers 3 out of 4 in the series.

It’s the second straight game that Pirates closer Jason Grilli served up a home run in the 9th inning.  Braun also took Grilli deep in the 9th in Saturday, a 2-run shot to help the Brewers come from behind to win.

At 14-5, the Brewers continue to hold on to the best record in the major leagues.  Their 9-1 road record is the best start in the majors since Atlanta opened 10-0 back in 1994. END_OF_DOCUMENT_TOKEN_TO_BE_REPLACED