You are here: Home / Archives for Steve McWhorter

For the second straight season, media members, head coaches and sports information directors voted Sykes as the top player in the league.  He was also voted All-Horizon League for the third time in his career. END_OF_DOCUMENT_TOKEN_TO_BE_REPLACED 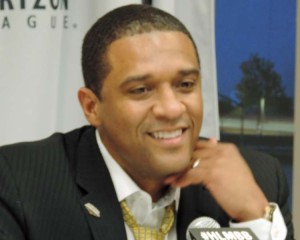 The UW-Milwaukee men’s basketball team can’t play in the upcoming Horizon League tournament, but the Panthers are closing out their season with a purpose.

J.J. Panoske scored a career best 19-points to lead the UWM-Panthers to a 66-60 win over Cleveland State on Sunday on Senior Day at UW-Milwaukee Panther Arena.

The Panthers (12-16, 7-7 HL) have two games left in their season, both of them on the road.  They have won six of their last seven home games to finish 9-4 at Panther Arena this season.

Two seniors will be leaving the program at the end of the season.  Steve McWhorter had 13 points and nine assists.  Evan Richard didn’t score yesterday.

Cleveland State (11-4, 17-11) had just beaten Green Bay on Friday night and could have moved within a half game behind first-place Valparaiso.  Instead, the Vikings fell to Rob Jeter’s Panthers, a team that gets no conference tournament or post season, so this is their post season.

The Milwaukee Panthers, who won’t enjoy any post-season tournament play this season, was trying to pull off a big upset at home on Sunday afternoon, leading Horizon League leader Valparaiso 28-23 at halftime.

UWM shot 50% from the field in the first half, while holding the Crusaders to just 27.6%.  The Panthers held that lead for the first half of the second half before the Crusaders grabbed a 44-43 lead with 9:02 to play.  Valparaiso went on a 11-0 run and never looked back. END_OF_DOCUMENT_TOKEN_TO_BE_REPLACED

The Milwaukee Panthers knocked down a season high 13 three-pointers (13 of 23 – 56.5%) on Tuesday night, knocking off the Oakland Golden Grizzlies 84-67 at UWM Panther Arena.

Seven players hit from beyond the arc to help the Panthers reach a season high in points.

Milwaukee set the tone from the start with five of their first six baskets coming beyond the arc.

The Panthers (6-12, 1-3) won the battle of the only winless teams in the Horizon League.

Akeem Springs led the way with 18 points (8 of 10 fg), while Steve McWhorter had 16 points and 12 assists.  Sophomore Cody Wichmann added 15 points by making all five of his three-pointers.