You are here: Home / Archives for Sydney Hilley 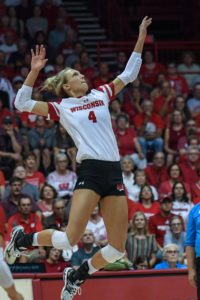 Kelli Bates recorded a match-high 20 kills with 10 digs to earn her fourth double-double of the season and 26th of her career for the Badgers (11-2, 2-2).  Setter Sydney Hilley also needed a double-double, the second of her career.  The freshman tied her career high with 51 assists and added 10 digs.

The Badgers return home for another top-10 clash against No. 3 Minnesota on Wednesday.  The match will be televised live on the Big Ten Network.

Rettke, a 6’8 middle blocker, averaged 5.0 kills, 1.83 blocks and 0.83 digs per set in leading the Badgers to two wins over the weekend.  Wisconsin swept Louisville and No. 11 North Carolina in the Big Ten/ACC Challenge at the UW Field House.

The 6th ranked Badgers (2-0) take to the road for the first time this season, traveling to Manhattan, Kansas, for the K-State Invitational on Friday and Saturday.  The Badgers will face Syracuse (2-2) and Arkansas (3-0) on Friday before taking on host Kansas State (2-1) on Saturday.