You are here: Home / Archives for Volleyball

The top-ranked Wisconsin volleyball team will pause all team-related activities for at least 14 days due to a number of COVID-19 cases within the Badgers program.

“For the safety of our student-athletes, we are pausing all team activities,” UW head coach Kelly Sheffield said.  “Our athletes are taking all necessary precautions to keep everyone in the program safe.  We’re really looking forward to resuming team activities when appropriate.”

The Badgers were scheduled to face 4th ranked Nebraska in a Friday-Saturday series at the UW Fieldhouse this weekend.  That series, as well as the March 5-6 series against Iowa have both been postponed. For the seventh-straight season and the 23rd time in program history, the Badgers earned a bid to the NCAA tournament.  The Badgers were selected as the No. 4-seed in the tournament and will host first and second round matches on Friday-Saturday in the UW Field House.

The eighth-ranked Wisconsin volleyball team captured the HotelRED Invitational after knocking off High Point Sunday night at the UW Field House.  The Badgers dropped the first set but won the next three, 23-25, 25-20, 25-21, 25-17, to hand the Panthers their second loss of the day.

The Badgers recorded a season-high 17 blocks led by middle blockers Dana Rettke and Tionna Williams with nine and eight respectively.

The Badgers knocked off second-ranked Texas just one day earlier.

Wisconsin sold out their second straight match of the season at 7,052 fans in attendance, which ties for fifth on UW single-match attendance list.  Wisconsin has sold out the Field House 14 straight times.

For the fifth straight year, the Wisconsin volleyball team opens the season among the top-10 teams in the nation.  The Badgers are ranked No. 9 in the 2018 American Volleyball Coaches Association (AVCA) Top-25 preseason poll, released on Wednesday.

It is the 10th time in program history that UW is ranked in the top 10 and the fifth-straight year under head coach Kelly Sheffield.  Wisconsin was ranked fourth in 2016, tied for fifth in 2015, sixth in 2014 and seventh in 2017. 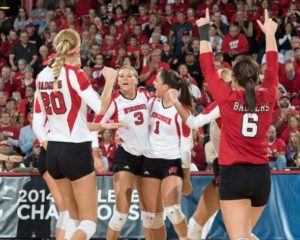 The 5th ranked Wisconsin women’s volleyball team dropped a set for the first time this season, but rallied to knock off in-state rival Marquette 19-25, 25-13, 25-21, 26-24 in the first round of the Badger Classic on Thursday night in the UW Field House.

The Badgers remain unbeaten on the season, improving to 8-0.  Marquette falls to 5-5.

The Badgers wrap up tournament play on Saturday when they take on Southern Mississippi at 7 p.m. in the UW Field House.

A Wisconsin (25-4 overall, 17-3 Big Ten) win would have given them a share of the Big Ten Championship with Nebraska.  The Cornhuskers ended up winning the title outright by knockoff off Michigan.

“We gave it a heck of a run there,” UW head coach Kelly Sheffield said.  “Like I told our team, I think we showed  how far we’ve come since the previous time that we played them and we can continue to get better.

After Minnesota tied the match at a set apiece, the Badgers came up with a dominating 25-11 third set win.  They held the Gophers to their lowest point total of the season.

But the Gophers answered with a strong fourth set, winning 25-17 to force a fifth and deciding set.

The Gophers took control immediately and pulled away for a 15-8 win on Senior Night in Minnesota.

The Badgers now look ahead to the postseason, expecting to hear their name called when the NCAA volleyball championship bracket is announced on Sunday.

The 64-team bracket for the 2016 NCAA Volleyball Championship will be announced at 8 p.m. Sunday night on ESPNU.

The third-ranked Wisconsin women’s volleyball team closed out regular season home play with a 25-15, 22-25, 25-16, 25-7 victory over the Iowa Hawkeyes on Wednesday night.

Wisconsin’s four seniors, Lauren Carlini, Tori Blake, Romana Kriskova and Haleigh Nelson were honored after the match and many of the sold out crowd of 6,012 were on hand to show their appreciation.

The win marks the 110th win for the senior class, ranking third in UW program history.

Wisconsin (25-3, 17-2 Big Ten) is tied with Nebraska for the Big Ten lead with one match to go.  The Badgers can win a share of the Big Ten title if they can knock off the second-ranked Minnesota Gophers in the Twin Cities on Saturday night.

The Badgers will take a 10-match winning streak into that contest on Saturday.