You are here: Home / Archives for Todd Mayo

It’s one and done for the Marquette Golden Eagles in the Big East Conference Tournament, falling to Xavier 68-65 last night in New York.  The result leaves the Golden Eagles waiting for the NCAA selection committee to make its picks so the N.I.T. can pick up the leftovers.

Freshman Deonte Burton scored a career high 23 points and Todd Mayo added 21, but it wasn’t enough to keep Marquette (17-15) from its 15th defeat this season.

The Golden Eagles lost, despite shooting 57.8% from the field.  They got only 14 free throw attempts in the game and made eight.

The loss means Marquette’s streak of eight straight NCAA Tournament appearances will come to an end.

The Muskateers (21-11) would appear to be a safe bet to land a spot int he NCAA Tournament field when the brackets are made known on Sunday evening.

The Marquette Golden Eagles coughed up a 3-point lead with 27-seconds left in double overtime and fell to Providence 81-80.  The loss leaves Marquette (17-13, 9-8 Big East) without any chance of a spot in the NCAA Tournament field, short of winning the Big East Tournament title.

Marquette played much better than they did in Sunday’s loss at Villanova, but they couldn’t close the deal last night.

Todd Mayo, who scored 26 points and pulled down 11 rebounds, had one last chance for Marquette.  His three-pointer at the buzzer went off the rim to end it.

The Golden Eagles close out the regular season at home on Saturday for Senior Day when St. John’s pays a visit to the Bradley Center.

Todd Mayo hit a three-pointer with 6.3 seconds left to tie the game and force overtime.  Then Marquette reeled off 7-straight points to start the overtime, 5 of the 7 from freshman guard John Dawson.  The Golden Eagles hit 8 of 8 from the free throw line in the overtime to put the game on ice.

Marquette (11-8, 3-3 Big East) was down by seven with 3-minutes left.  A 3-point shot from Jake Thomas and a dunk by Jamil Wilson cut the lead to two with just over 2 minutes to play.

Next up, Marquette returns home to face Villanova on Saturday.

The Golden Eagles jumped to a 39-16 halftime lead and never looked back.

Marquette has dominated the all-time series, winning 19 of 22 against the Bulls.  They’ll host DePaul on Saturday at the BMO Harris Bradley Center.

Marquette could have used him on Wednesday night in Green Bay, but Todd Mayo has been cleared to return to action for the Golden 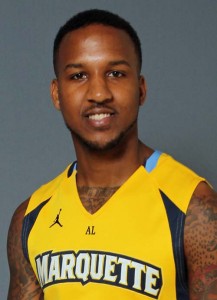 Eagles.  He’ll be in uniform this Saturday when Marquette faces LSU.

Mayo averaged 7.9 points a game as a freshman, but missed the first 10 games this season because he was academically ineligible.

Marquette scored a season low 47 points in a 49-47 loss at Green Bay on Wednesday.  The Golden Eagles are hoping Mayo’s return will help increase their offensive production.

Mayo played in 35 games as a freshman for the Golden Eagles last season, averaging 7.9 points and 2.7 rebounds.